I have a condition that renders me out for a while on some days.  A large amount of pain in my joints will cause muscle spasms and then when I take my pain meds, I fall asleep.  This makes me able to dream when I fall asleep from it.  The bad news is it can severely hamper my ability to type, so I am looking for a free program with accurate transcription for these times.

I did have a few dreams while I slept today.  The last one I had today was about people who mistrusted each other over some sort of deal they were making.  It involved a man and a woman talking over a telephone.  The woman was shocked by the man’s statements.  I don’t remember much else about this dream since I was distracted when I awoke.

Another dream I had involved driving from place to place…

Source: From our inbox to you from Daily Om on the importance of Napping.. 🙂 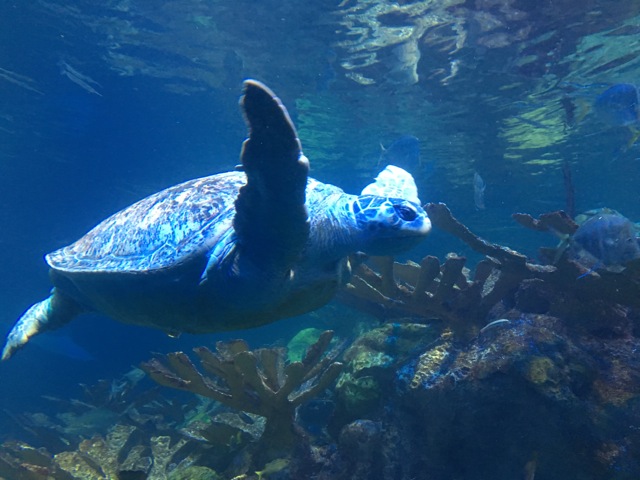 Note: I took this photo on a recent visit to the New England Aquarium. Myrtle is a Green Sea Turtle who’s lived at the aquarium since 1970. She’s about 80 years old and 500 pounds! In addition to squid, she eats lettuce and cabbage and is particularly fond of brussels sprouts. She can have mine!

I know if I keep my focus clear

My muse will steer

We made you, now you

Last night I had a dream my leg from below the knee was amputated. It was a strange, unexpected dream that has me bewildered. Dreams like this aren’t always about the event but something symbolic and/or subconscious. My wife assured me its probably something I am struggling with or something like that. I didn’t have a huge supper last night and I slept well so there wasn’t anything that could have upset me overnight. Perhaps I shouldn’t read too much into it. Having both legs is a good thing and makes me appreciate those who have had to have an amputation in their lives. Here’s to sweeter dreams soon.

I wrote back in July that I was suffering some acute narcolepsy since starting Belsomra. These episodes have continued.

Before I get into the side effects I’ve experienced, I want to state that Belsomra has helped me far more than any other sleep aid I’ve ever tried. Most people who have insomnia only suffer with it for a period of time, and then they get better, and they may relapse later on. The kind of insomnia I have is chronic, it never lets up, and I’ve had it since I was a small child. This kind of insomnia runs in my family. My daughter has suffered insomnia since birth.

Researchers at the University of Lincoln took an interest in what they call “lucid dreamers”, those who actually know they are dreaming while the dreams play out.

In the first empirical study on the subject, they found such people to exhibit better problem solving abilities in their day-to-day lives.

Lucid dreaming is not a new concept, although it sparked interest upon the release of the 2010 film Inception, in which dreamers were able to discern incongruities in the scenario of their dreams. The film suggested that such an ability indicates superior levels of insight, with dreamers realising they are not in reality because things don’t make sense.

“It is believed that for dreamers to become lucid while asleep, they must see past the overwhelming reality of their dream state, and recognise that they are dreaming,” says Dr Patrick Bourke, senior lecturer at the Lincoln School of Psychology. “The same…

As weeks went by, I couldn’t believe I still hadn’t made any friends. With a 3 hour gap between classes I would just sit alone and write in my journal wandering what my life would be like if I wasn’t at this school, and if I would’ve had…

Hope you have a wonderful day! Remember,  ‘Today is the oldest you’ve ever been, and the youngest you’ll ever be again.’-Eleanor Roosevelt